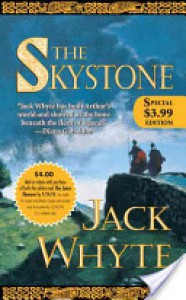 As a side note, my cat Merlyn is named from a character in the series. Every bit as awesome as I remembered. Rich and full of detail.  I absolutely love the two main male characters (Caius and Plubius). This book absolutely sucks you in, even on the second time reading it. I'm not into military history but the author must either really know his stuff or did an amazing amount of research. This book is half historical fiction and half fantasy. But it's an amazing combination that is pulled off brilliantly.  It’s a historical fiction telling of King Arthurs Camulot but with all the names romanized and such.   This first book is amazing in how much it sets up for later books. It shows how Caius and Plubius meet, which is quite a funny story, it shows their military time together and it shows the beginning of the colony which will eventually become Camuloud.  Relatively early in the book Plubius makes an arch enemy and they have fights on and off throughout the book but it reaches its breaking point at the very end of the book. The book is left off there and everything is wrapped up nicely for the second book in the series.   This was my second reading of the book and it was every bit as amazing as the first time around. I highly recommend this to historical fiction and fantasy readers.